VietJet (HM:VJC) surpassed Vietnam Airlines (HNO:HVN) in market capitalization on Monday. The airline launched in 2011 with news breaking headlines thanks to the company’s flight attendants wearing bikinis onboard the plane. 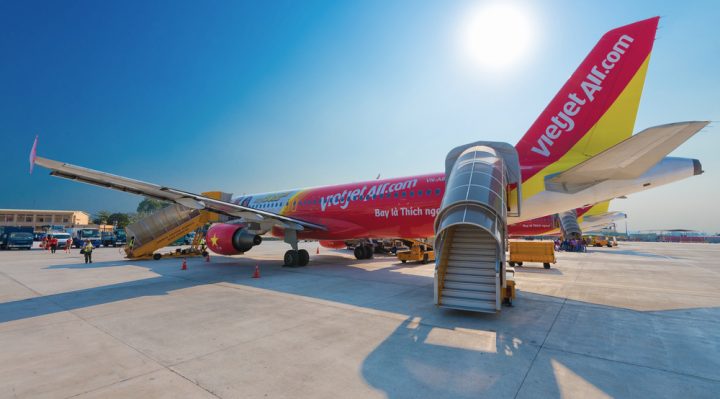 The offering, only available on select flights, helped push the company’s market capitalization past the state-owned Vietnam Airlines.

The company’s market share has risen steadily since it first offered flights in 2011. VietJet’s growth has led to an immediate market share decline on Vietnam Airlines, which maintained a $2.1 billion market capitalization in 2011.

Vietnam’s growing economy and young travelers have been major contributors to the growth of VietJet.

VietJet’s management expects to go international, offering flights across Southeast Asia. CEO Nguyen Thi Phuong Thao was listed as one of the world’s top 100 most powerful women by Forbes.

The company’s unique marketing is attributed to its rapid gain in market share.

Flight attendants and models wore bikinis onboard, with the company being fined 20 million dong as a result. The company maintained their bikini-clad attendants for two years before offering the unique experience on a select few sites.

The company’s key focus on customer satisfaction leads the industry. Differentiating itself from the competition with 10 entrée offerings for in-flight meals has led to a growth in popularity among passengers. The company also offers a robust online reservation system.

Thao’s focus on customer satisfaction has helped the airline correct late arrivals, which hovered near 50% when the company first started. The figure was down to 16.4% during the first two quarters of 2016, just behind Vietnam Airlines’ with 15.3% during the same period.