The Japanese yen rose against its American counterpart on Tuesday, enjoying investor support as Tokyo markets reopened after being closed for a national holiday on Monday.

The yen and the Aussie both reversed course slightly in Asian trading and early European markets with solid Japanese manufacturing data providing a boost for the JPY.

Also adding to the general sells off in the US dollar. Some geopolitical tensions helped send the USD/JPY pairing lower as well, after it was announced that Turkey had shot a Russian air force plane after it Turkish airspace was apparently violated. Russia labelled the incident as extremely serious but at the same time called for calm. At this point it is difficult to ascertain the gravity of the potential fallout from this incident, but the markets are expected to show caution for at least the rest of the European trading session, with risk off flow weighing on USD/JPY as it trades closer towards the 122.50 mark.

Economically, the markets will be focused on the 2nd revision of US Q3 GDP, with expectations of a 2.1% increase. Anything less than the 2.1% could add further pressure on the USD/JPY pairing and may well push the pair towards the 122.00 level as risk off flows continue to dictate the trades of the day. 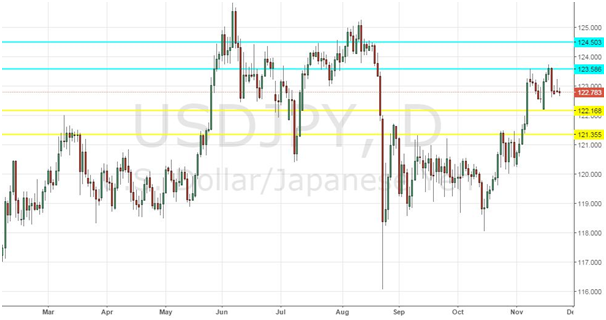